Happy World Architecture Day from LGA! Celebrated on the first Monday of October, this day is designed to celebrate the importance of architecture around the world, both ancient and modern.

To celebrate this international day, our team reflected on some of the projects that inspired them to follow their dreams and continue to do what they love.  Keep reading to learn about their favorite projects from around the world! 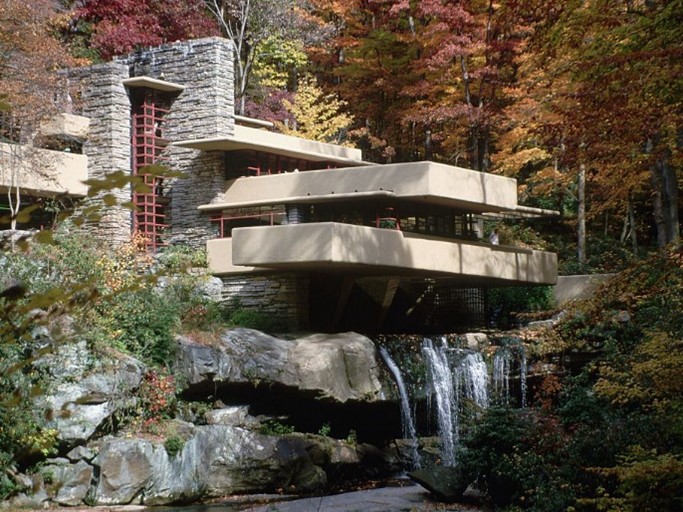 “I saw photos of it in the second grade and fell in love with it. It is what inspired me to become an Architect. Visiting Fallingwater was one of the conditions for our taking a trip to Tennessee in 1994 and if it weren’t for that trip we probably never would have moved here. 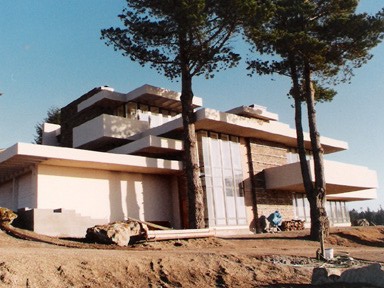 What drew me to this project initially was the way it fits in with the surroundings including the trees, rock outcroppings and the waterfall. The use of the windows and materials to bring the outside in and give you the feeling of being part of the surroundings even while indoors.

The Owner of a local winery in California came into our office one day with a book on Fallingwater and said he wanted to build a version of it on the on the Mendocino coast overlooking the Pacific ocean. This photo (right) is the house I designed for him. He liked the local stone so much that he bought the quarry to make sure he could get it on his schedule. He also bought two abandoned warehouse buildings and had them torn down to use some of the beams in constructing the roof overhands and long spans.

He inspired me to think outside of the box and take existing site conditions into consideration. I have used many “Wrightian” inspired elements in designs through the years.” 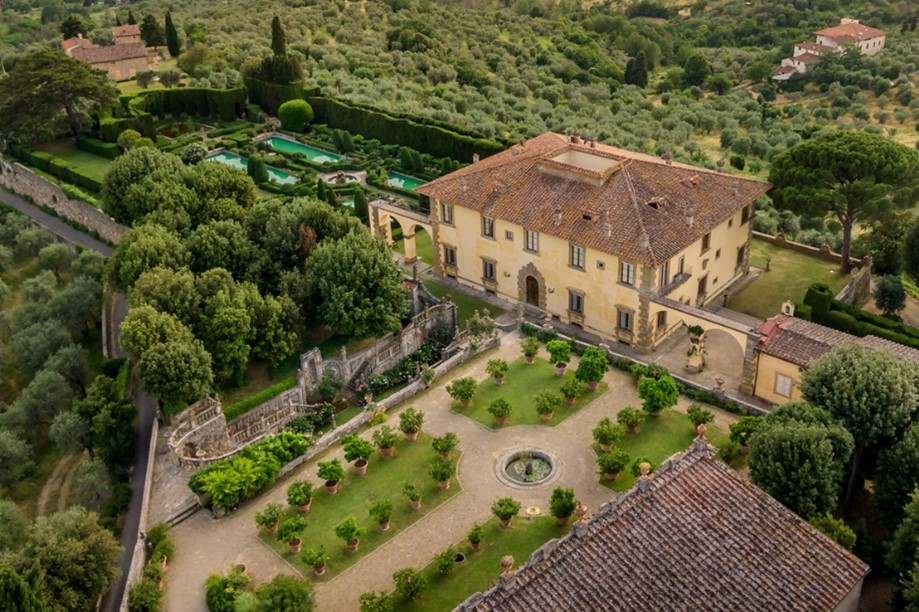 “The original architect of the 15th century farmhouse-turned-villa is unknown, but the sons of the original owner, the Gamberini brothers (better known as Bernardo and Antonio Rossellino), did become famous sculptors and architects.  In the 17th century the Zanobi Lapi family expanded the villa and first laid out important components of the garden. More work followed as the villa evolved over time.

I studied this project in architecture school as part of an analysis project. It’s compositional qualities in plan and section were fun to figure out and draw. Then I visited the project during a study abroad program. Being there was a fantastic, real-time experience. If visiting Fallingwater as a high school student made me want to be an architect because of the unprecedented architecture, experiencing Villa Gamberaia as a college student and then later also as a newlywed, made me appreciate that architecture was not just about designing unprecedented building forms, but using architectural forms to celebrate the urban or landscape context. This project made me understand how quiet but strategic architectural moves can allow the architectural experience to reach farther than the building itself or even the immediate context.

This Renaissance project can be understood rationally as a complex and interesting site plan with a composition as modern as an Abstract Expressionist painting. But what stands out the most is its evolution over time into a place that is not understood by static symmetries and monumental arrangements of forms, but by asymmetrical, but strategic moments arranged in a sequence over time through the terraced site.

When the opportunities exist, I try to employ the strategic deployment of building forms and axes to set up distant views of significant relationships in a site plan.” 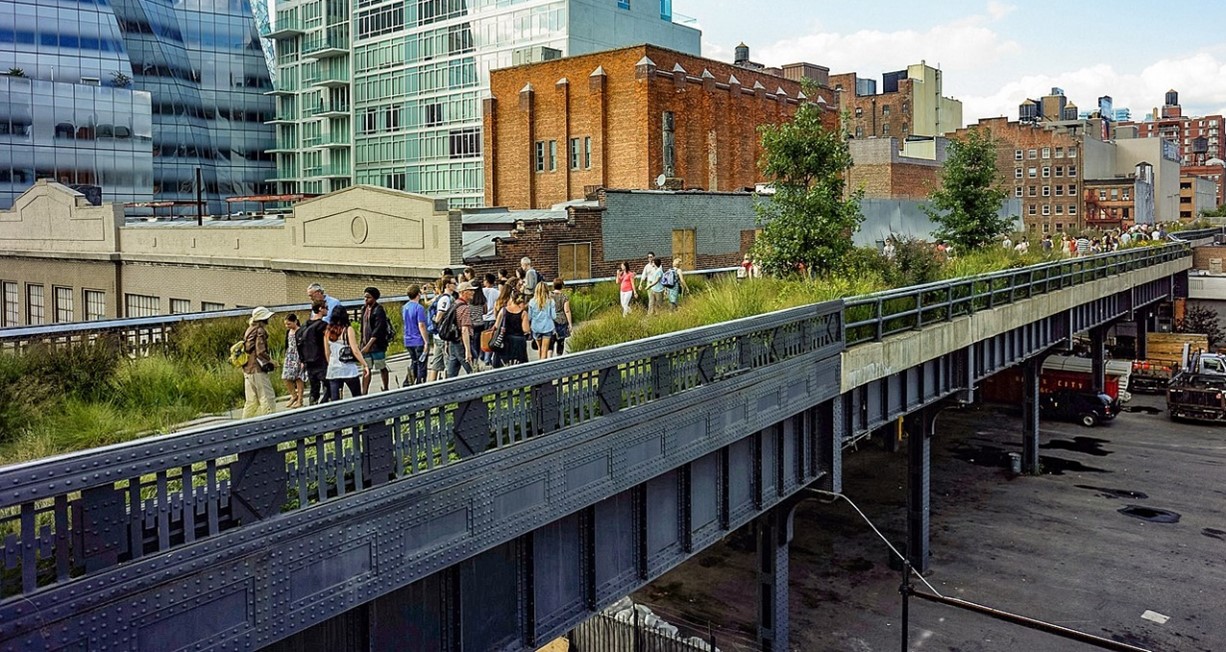 “I like a good refurbishment and I applaud any project that gives the city back to humans.  I think it is wasteful to always build new additions (to the city or structure) without looking first at what we already have and how we can creatively reuse it. This project does exactly that.” 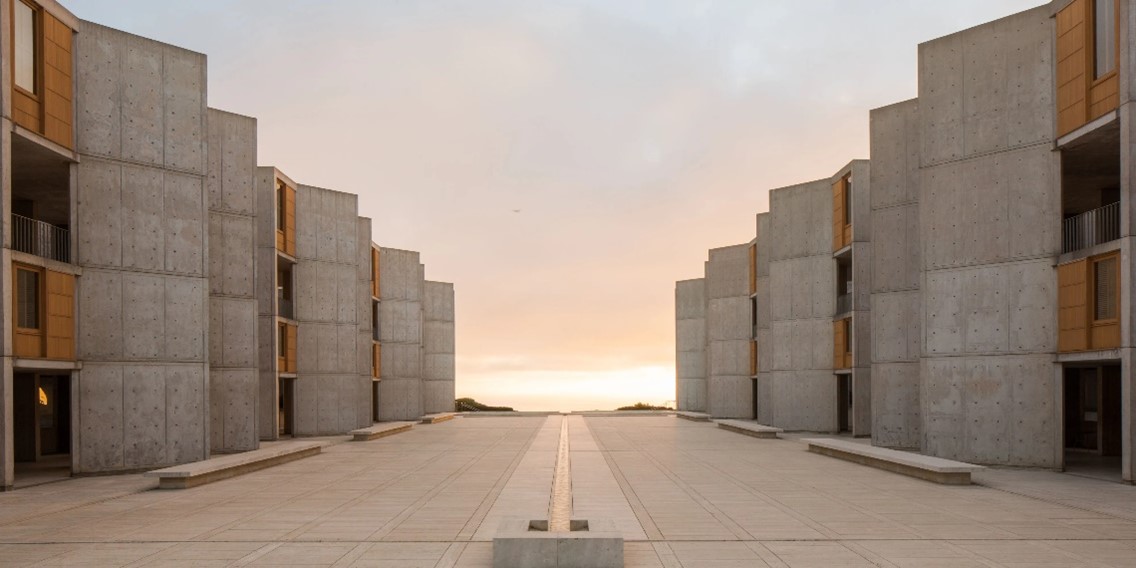 “Why shouldn’t a building for scientists be as awe-inspiring as the Parthenon, the Palace of Westminster, or the World Trade Center? This institute, founded by Jonas Salk, is tasked with preventing birth defects, eliminating infectious diseases, and curing cancer. Essential to this process is communication and collaboration amongst scientists. Louis Kahn’s modern open floor plan has not only encouraged this, but the inherent flexibility has allowed for an organic workflow that has withstood the test of time. He allowed for ample daylight to illuminate the spaces which even reaches the basement level with the use of open-air courtyard and light wells. The institute is site-specific, incorporating a central plaza with a simple water feature (due to his collaboration with architect Luis Barragan) overlooking the ocean. It’s highly functional, beautiful in its modern brutalist style, and playfully unexpected for a research facility.” 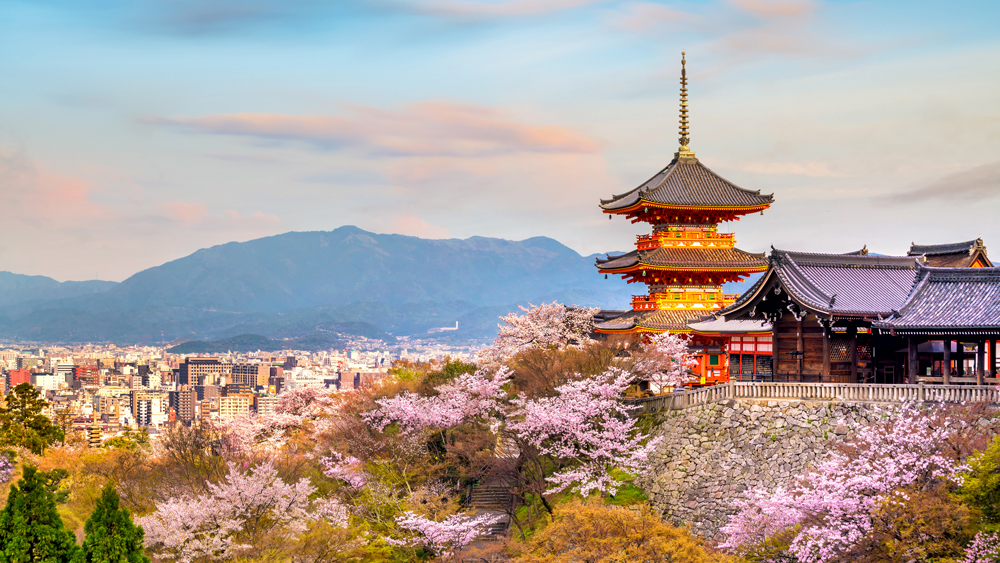 “I can’t say that I have a favorite building but, one of my favorite places in the world is Kyoto, Japan. The traditional and historic Architecture of temples, tea houses, and Zen gardens is just second to none. I love the immersion in nature of the quiet spaces set against the ornate grandeur of the large temples. It is so completely different than the Western-built environment.” 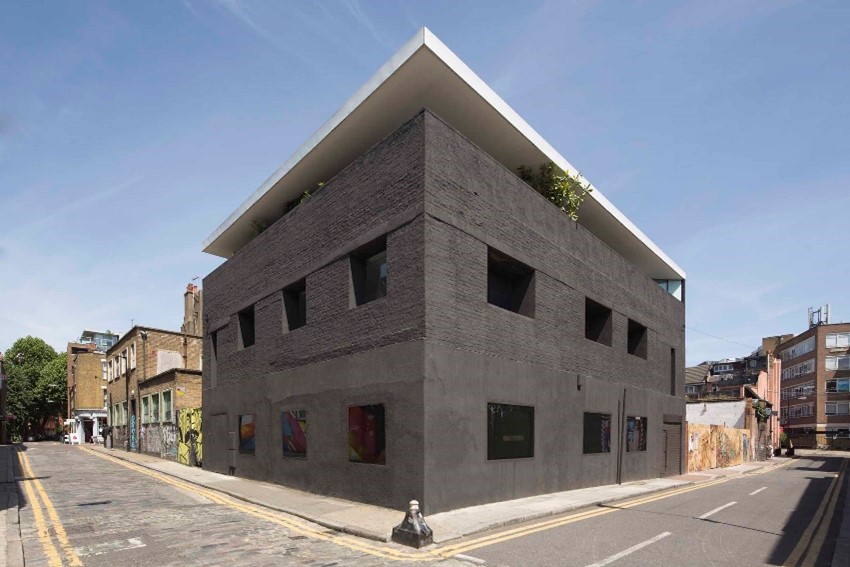 “When I was in architecture school “Blobitecture” was all the rage, and I couldn’t get into it.  Formal gymnastics for the sake of formal gymnastics.  Dirty House was a breath of fresh air; it was unafraid to be textural. Simple. “Unfinished”. What drew me to this project was its formal purity.  There is an efficiency in its few design moves.  Lots of ROI.  This project made me realize good design shouldn’t be fussy.”

Adjaye:  “It doesn’t have to be dramatic.  It can be completely mundane but it has to be something that’s a part of you.” 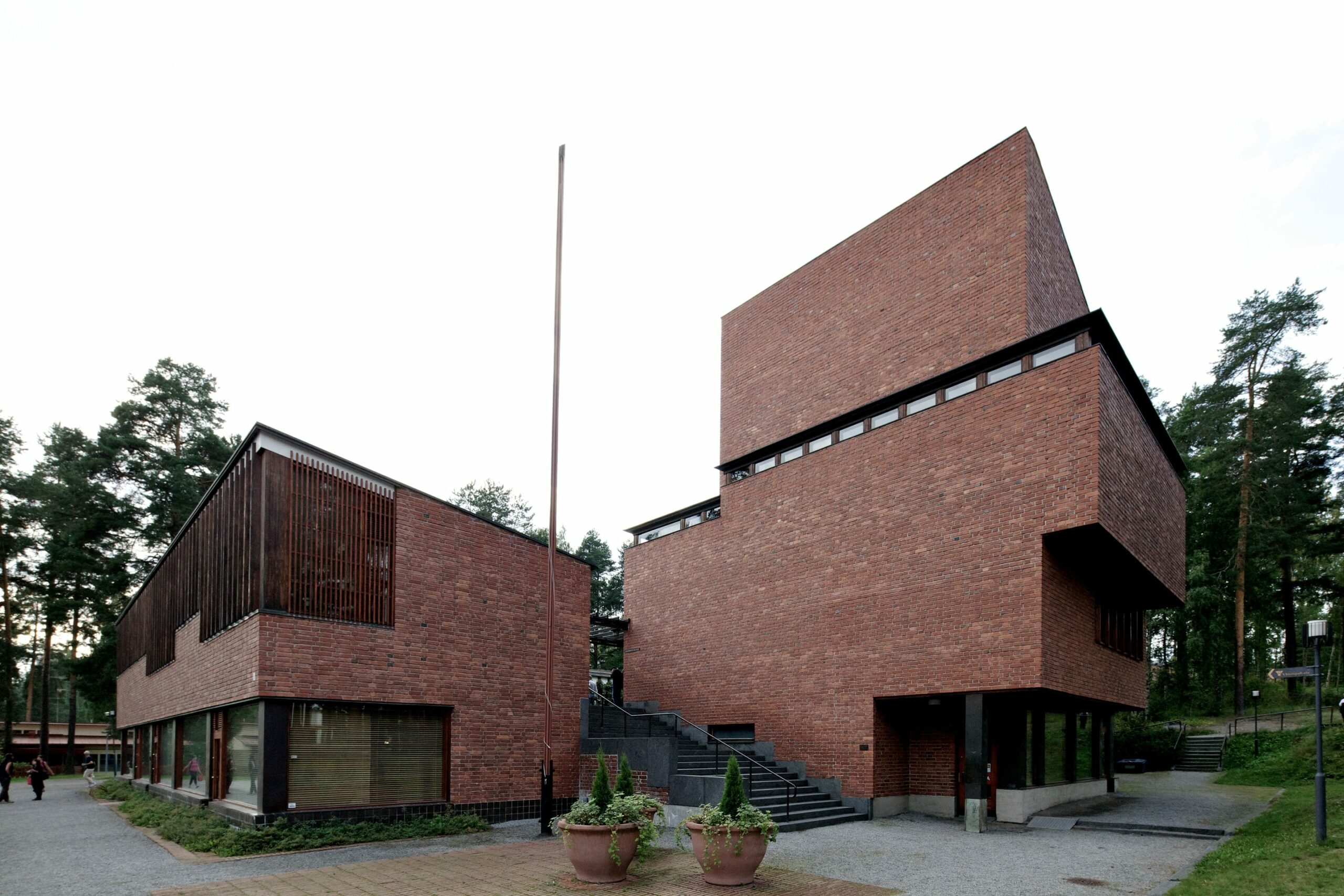 “Alvar Aalto was covered in my architectural history courses, but in many ways I feel like his work was underrepresented in those classes. He is one of modern architecture’s masters, and at some point after architecture school I sought out his work, eventually traveling to Finland with my wife and some friends to tour his work throughout his native Finland. In Architectural circles, Säynätsalo Town Hall is considered one of the great modern buildings… and the fan trusses in the Council Chamber are incredible.

Säynätsalo Town Hall is a really small mixed-use and local government building in the middle of Central Finland’s forests and lakes. Although small, Aalto tricks the scale and it appears monumental. Like all Aalto buildings, there is an incredible attention to detail and the whole composition is tightly knitted together with big things evident in the little things and conversely little things evident in the big moves. The building is simultaneously modern and timeless, and is organized around a central courtyard with a formal approach to the government/ council chamber side and an informal approach with landscape steps from the village side.”

Rather than just emulate form for the sake of form, I think the overarching takeaways are manipulation of scale, recognition of public & private, establishing hierarchies within the design, attention to the smallest details, the idea of a regional modernism.”

Founded in 1982 by Jerry W. Lewis, AIA on the principles of honesty, integrity, and exemplary service for our clients, LGA is a professional corporation that has become the Firm of Choice – the firm that clients have chosen again and again for comprehensive and distinctive design, rendering, assessment, and masterplanning services.

What Can Lewis Group Architects Do for You?